Well I've been DYING to share some things with you for a few days now, and I just had to make some time to sit down and actually blog it!

First of all this morning I had a delicious green smoothie of green apple and a handful of grapes, I didn't have any baby spinach and didn't feel like silverbeet in it so no leafy greens, but it came out green nonetheless and was lovely and sweet and refreshing! Then for morning tea I was feeling like a little indulgence so I made some of this guilt free Hot Malted Chocolate! Thanks to Quirky Cooking who gave me the original recipe for Creamy Hot Chocolate (Dairy Free), which I have tweaked to my personal tastes (and to make it a Malted version). 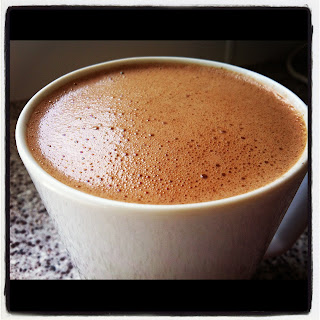 Method:
Grind the cashews in the TMX for 10 seconds on speed 9.
Add 300g water and mix for 1 minute on speed 8.
Add your cacao, cocoa or carob, maca and sweetener of choice, then cook for 5 minutes at 70-80 degrees on speed 4.
When its finished whizz it up for 15-30 seconds on speed 8-9 to get it a little frothed up. Enjoy a lovely warming cup of super creamy and indulgent Hot Malted Choc - without the guilt! (or the hayfever in my case! LOL)
*If making for more than one person, just double or triple the recipe, and extend just the cooking time for about 2 minutes. :)

So next I wanted to tell you all about baby stuff in the Thermomix! As I go along I just keep realising there are more and more things that I can use it for! :D

So I started out by asking Jo from Quirky Cooking how she thought I would go about making my own rice cereal for bub (as Jo's my go-to healthy food guru!). I really wanted to have a better option than rice cereal out of a box for bub. She suggested I soak some brown rice and then grind that up. I experimented a couple of times and here's what I ended up with: 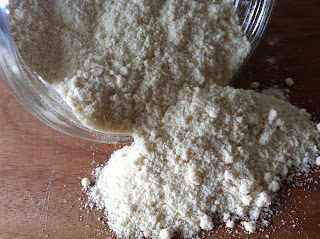 Method:
(this is a tiny bit fiddly, but I think its worth it to be giving bub whole foods free from additives and preservatives!)
Place brown rice in a container with water to soak for 12-24 hours (the longer the better I tend to think).
Strain water from rice, place rice into a baking dish and bake in oven at about 100 degrees C for a couple of hours until its dry. (You can't make flour with wet rice!)
Mill rice in TMX for 1 minute on speed 10.

To make this into rice cereal you can just mix it up with a little boiling water from the kettle, and some pureed fruit or veggies (see below). Or you can cook it in the TMX as per the Everday Cookbook on page 163. The reason I went to the trouble of soaking the rice then drying it out was so that its easier to digest and doesn't really NEED to be cooked. :) 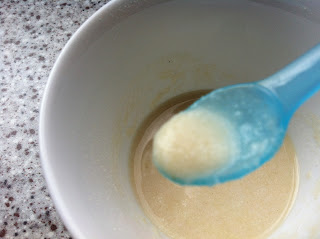 Taste and texture wise this turned out pretty much exactly like supermarket bought rice-cereal, it just looks darker because well, I used brown rice! LOL (brown rice has far more nutrients than white rice, thus the reason for using brown rice). The ONLY drawback that I can see from doing it this way is that the supermarket brands are fortified with Iron which growing babies need (although i'm wondering how our grandparents and great grandparents managed to raise healthy children without fortified rice cereals? Interesting thought!). My solution to the Iron issue is simple: I never mix up plain rice cereal for my children ANYWAY (have you tasted it by itself? ewwwwww), I always add some pureed fruit or vegetables to it, so to make sure he's getting enough iron, I'm simply going to steam then puree some baby spinach and add that to some apples and the rice cereal, and voila! Iron-fortified NATURAL baby rice cereal! *Pats herself on the back* :) hehehehe

I also made some baby food in the TMX last week and have been meaning to post my method on here for anyone who's interested. I made pure sweet potato puree, and apple puree as its best to start kids on puree made from just one fruit or veggie at a time. 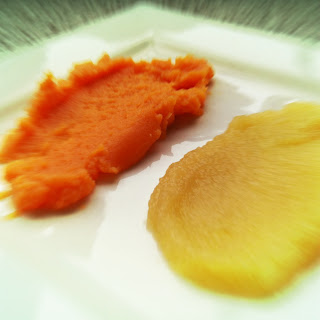 Fruit and Veg Baby Food in TMX:
Place water in the bowl of the TMX to just cover the blades.
Peel and thinly slice your hard veggies such as pumpkin or sweet potato and place them in the rice basket.
Peel and core your apples or pears and chop into large chunks and place in the Varoma (you can fit 2kgs of fruit in here EASILY).
Set time to 20-30 minutes (depending on how soft you want the food prior to pureeing it), temp on Varoma setting, and speed 1.
When its finished steaming, set aside the varoma, pull out the rice basket with the veg in using the spatula, and tip the water from the bottom into a jug - keep this water!
Tip the veggies from the rice basket into the TMX bowl and add a little water (about 30g to start with).
Puree for 30 seconds on speed 7-8. Check the consistency, then add more water and process longer if you want it smoother/thinner.
Do the same with the apples from the Varoma, although you might want to do them in two batches, and apples need far less water, even none at all sometimes!
Freeze in ice-trays or small containers and use as needed.

The Thermomix is ALSO a steam steriliser! Place all your bottles, dummies etc in the Varoma, put about 1L of water in the TMX bowl, and put on for 15 minutes on Varoma temperature on speed 1, sterilising DONE, AND you can use the water for formula bottles too! :D 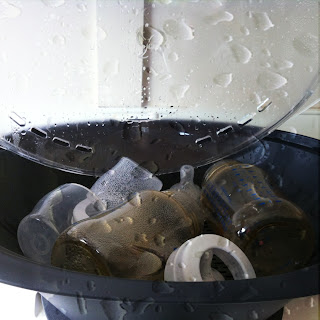 Okay I'm going to have to pull up here as Jon has just woken and wants some time with Mummy! Coming next time I have recipes for some delicious raw vegan salad and dressings, a raw vegan pate, more smoothies, and who knows what else!

By the Way the 30-in-30 Green Smoothie Challenge is officially a success! We reached 30 people who've joined last night! :D Don't forget to comment on this post in order to be entered into the draw to win Harvvey Diamond's book Fit For Life, Not Fat For Life!