My Microwave is Annoying me......and other assorted musings

So, I know, two posts in one day is a bit much, but I've just had so much rattling around in this head of mine today and yesterday, and I feel like I'm learning and growing and changing at such a rate of knots lately that one post today just won't do it!

Firstly, my microwave is sitting there on the bench in the kitchen, taking up a big chunk of my bench space and its just.....annoying the heck outta me!!! I'll explain more (and ask for advice) about this later.

For now more of the yummies I made (with my daughters help) yesterday, and what was on the menu in the casa of "going raw" today! LOL

I mentioned in my last post that yesterday afternoon my daughter and I made this awesome chocolate chip cookie dough from Chocolate Covered Katie, all I did was mix it up in the Thermomix instead of a food processor, and for a FIRST, my daughter LOVED it!!! Hurrah! 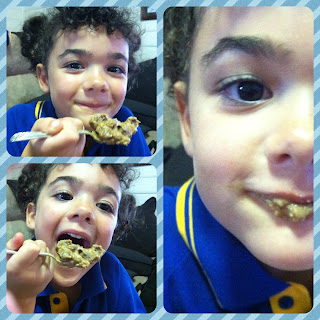 It's really gooey and just totally scrummy, the first "healthy" snack I've turned out since starting on this journey that my daughter hasn't turned up her nose at.

So, today's breakfast was another green smoothie-juice (I've decided to use the term "smoothie" if its a thicker type, and "smoothie-juice" if its still the whole fruit and veg rather than actually juicing, but is a thinner juice-like consistency). It was kind of a "what have i got in my fruit bowl that might go together" smoothie-juice and you know what? It turned out so awesome its going into regular rotation! 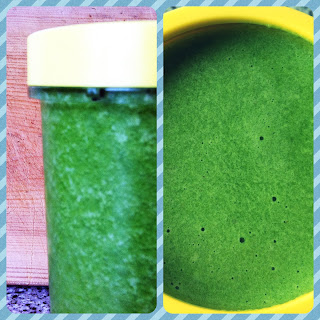 I think I'll call this one "Monster Green Slime" just for fun and cause its sooooooo darn green! LOL

Method:
Combine all ingredients in TMX on Speed 6 for about 10 seconds then scrape down the sides with spatula, then whiz up on speed 9  for another 30 seconds until nice and juicey.

This was so refreshing (not to mention completely delicious) I was ready to BOUND out the door about 2 minutes after drinking it, what a BRILLIANT way to start the day!

My mid-morning smoothie was another variation on my berry/nut/banana smoothie. This morning I wanted to try some Maca powder as I just finished watching the DVD's from Uncooking101's "Home Study Course - An Introduction to Raw Food Made Easy" and Eva mentioned that Maca, in addition to its other benefits outlined here, has quite a nice malt-type flavour. So I thought the combination of Maca and Cacao would not only give my power smoothie a nice energy boost, but would also taste pretty great, and oh I was SO right! LOL

Mid Morning Power Smoothie:
Ingredients:
1-2 Bananas
1/2 to 1 Cup Frozen Mixed Berries of your choice
1/3 cup raw cashews or almonds (soaked preferably, but if you don't have time its pretty good with just raw nuts)
2 huge handfuls of baby spinach or other greens
8 large cubes of ice
Water to your desired consistency
Today's added ingredients:
1 tsp Raw Cacao powder
1/2 tsp Maca powder
2 fresh pitted Dates (I only use the dates if i'm putting Cacao in as they're not necessary to sweeten the smoothie ordinarily, only to counteract the slight bitterness of the Cacao)

Method:
Blend on Speed 6 for 10 seconds then scrape down sides of bowl and blend on Speed 9 for about 1 minute. Serve and garnish with a berry or two as desired and enjoy! :)

Then for lunch today I had another awesome Slaw (the reason I'm having Slaw type salads is I can't honestly be bothered chopping up veggies the traditional way most days, and I haven't got my spiraliser to turn the veggies into nice noodles yet!) made with the dairy free sour cream from yesterday's post, mixed with a Raw Mushroom and Walnut Pate based on this recipe but modified to my personal tastes:

Method:
1. Mince garlic in TMX on Speed 7 for 2-3 seconds.
2. Add remaining ingredients to bowl and combine on Speed 7 for approximately 10-15 seconds or until your desired pate-like consistency is reached (some people probably prefer larger pieces, others would prefer a creamier consistency with smaller pieces).

Then I made a well in the slaw mix, scooped some of the Pate into it and drizzled some dairy free sour cream over the top, mixed it all together and chowed down! Yummo! 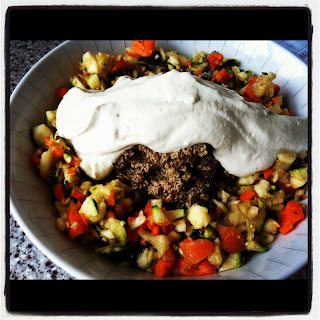 So that was the raw part of my day - dinner was a lovely steamed stuffed chicken breast and steamed vegetables with my family, but the way things are going, soon dinner will be something raw and veggie TOO - more on that in future!

So back to my microwave annoying me! I don't know why but suddenly its really bugging me, probably because of this new consciousness of what I'm putting in my body, i just don't see the need to nuke or deadify things anymore! So it's annoying me that its sitting there on the bench taking up space where I could have nice clear bench space for prepping all my lovely fresh foods, and also tempting me to use it.....So, does anyone have any suggestions as to what I should do with it? I'm not quite ready to completely get rid of it because I think hubby might have a heart attack if i just dropped that bomb on him all at once, so an alternative???? Til next time!! XXX
Posted by Brook at 7:25 pm