I know I know! I've been terribly slack with the blog this week! But I do have a good excuse - our baby (Jon, just over 16 weeks old) has a nasty little cold with a blocked nose and has been waking quite a few times a night for the past week. So we've been just a little tired in our house, not to mention that he's extremely grouchy during the day and needs a lot of extra love and care, so that doesn't leave Mummy much time to hop onto the computer! Which makes it hard for me to blog, OR to do my uni work (which starts today, so I'm having to MAKE the time this week) or really achieve anything in a day apart from feeding myself and him and doing a bit of tidying and a few dishes.

The good news is that I did get out walking 4 times last week (or maybe five, not sure), despite being deathly tired every morning! Woohoo! Saana went with me most times and it was really great having some alone time with her and being playful and energetic, and at the same time looking after myself - a two-for-one deal! :D

The bad news is that I've been all OVER the place with my eating the past week :(. I at least had a green smoothie for breakfast every day except yesterday, and for morning tea most days as well. I've been trying out reducing my nuts and oils and trying to eat more fruit - here's my fruit for just a few days: 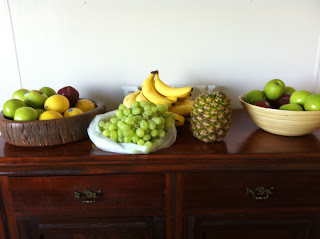 I have been making some awesome tasting smoothies though! Some of the combo's I've had the past week are: apple/grape/spinach, orange/pineapple/silverbeet, banana/date/berries/silverbeet, watermelon/orange/pineapple/baby spinach, pineapple/fresh mint/baby spinach, watermelon/frozen raspberries/silverbeet. One I made the other morning when I'd run out of greens was just apples and grapes, it was super sweet and sooooo delicious. 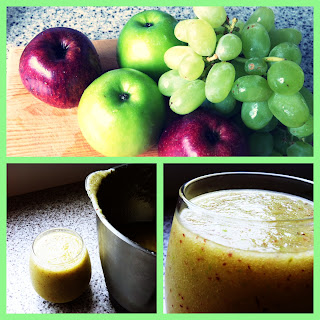 Another one I made was pineapple/strawberries/mint/silverbeet which just looked so bright and colourful even before blending I had to take a snap......... 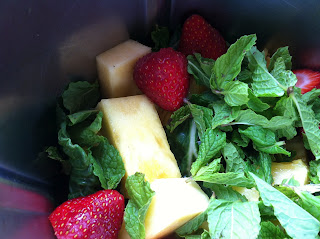 Yummo! My mouth is watering just looking at that pic! So I guess I did okay in that I ate a whole lot of delicious healthy fruit and a fair few salads. BUT the afternoon's and evening's I've been just terrible! I've been having mad cravings for salty, fatty and starchy foods, so at night or in the afternoon I've quite often been snacking on pizza with fresh pesto, bread with homemade peanut butter, just generally starchy, fatty, salty foods! Then I've also been eating some custard (as I make it at demos and it smells so good, then I go home and make some more and binge on that!) As a result of this I've been having more cravings, more hayfever, and energy and mood swings like you wouldn't believe!

After about my 5th day of feeling like crap (yes, I swore, sorry!) yesterday I decided enough is enough and I'm going to master this! So this morning I've had a smoothie of orange/grapes/baby spinach for breakfast, then I had a banana/date/berry/baby spinach one for morning tea, and I was still hungry so I've also just had a big bowl of these two salads: Beetroot Salad and Broccoli Salad (both from the TMX Everyday Cooking cookbook) 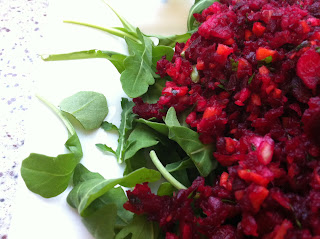 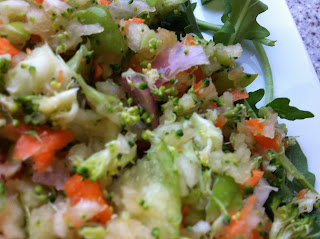 I'm already feeling much better than I have the past week - this morning my hayfever has abated already (other days its been lasting until noon at least) and I'm feeling more awake and just "with it", how awesome is it that you get such instant rewards from putting the right fuel into your body!?!?

So here's my plan for the week: Big green smoothies for breakfast and morning tea (and afternoon tea too if I feel like it) for lunch and for anytime that I'm feeling like bingeing I'm going to stuff myself with salads and more fruit, and eat a regular meal at dinner times with Saana and hubby. In addition to that I'm going walking/jogging at least 5 times this week!

Just to let you know that now I'm starting uni, and my tmx business is starting to take off, I'm going to be pretty busy (plus the athletics for Saana and hockey season for me are both starting) so I won't be able to keep up my previous pace of blogging every couple or every few days. I will try to blog twice or at LEAST once a week though!

I'll leave you with some gratuitous cuteness courtesy of Saana dressing up her little brother! 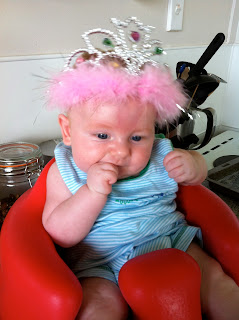 Hehehe! He's going to hate me for that when he's older isn't he?